a kind and gentle gale 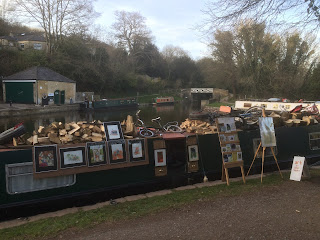 Good Friday's Bank Holiday found me alongside the wharf at Dundas Basin, and setting out my cards and a new display board for some big pictures. It was a good day, warm and sunny, and I met lots of nice people and friends. It's good to sit out on the towpath and socialise, after a winter huddling in our boats keeping warm and trying to keep the mud at bay.

There wasn't much boat traffic, because the level in the pound above Bradford had fallen so far that the lock had been closed to prevent further loss of water. All the way to Semington, boats were sitting aslant on the mud. Higher up towards Crofton things were even worse, and the Devizes to Westminster canoe race involved a portage for some of its length- a picture that a friend posted, of a long long row of canoeists trudging along with their boats on their shoulders, would have been comical if it weren't so worrying- is the canal infrastructure breaking down? -certainly something is breaking down....

At dusk, there was some bleating and four goats appeared on the aqueduct. Here's one of them. 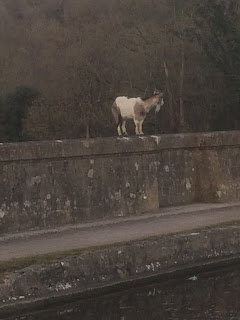 Saturday was more characteristic of a Bank Holiday, with Hurricane Katie hitting us. She arrived at the same time as a long convoy of hireboats; the lock at Bradford on Avon had evidently opened again, and all the holidaymakers were making up lost time in their Dash To Bath.

There were some exciting moments, as boats with tyro skippers entered the basin and turned hard a-starboard to pass northwards, and the wind hit them broadside on and sent them all over the place. I helped a boat come alongside; stern-faced paterfamilias was there at the helm, doggedly engaging maximum thrust all over the place, while wife and daughter looked hopelessly at the mess of ropes and wondered what on earth they were doing there; the elder woman was in tears, exclaiming that they'd had a miserable night without heating, and she was amazed the hire company let them loose on a day like that without any training; she just wanted to go home... she cheered up a little after the central heating had been sorted by a call-out chap, and at the prospect of the pub. And off they went, damp-haired and skittering before the gale's blast.

Comedy gold was the sight of another hireboat whose huge Jolly Roger, flapping at the stern, kept wrapping itself around the head of the helmsman, as he struggled to make the corner without being blown into the moored boats. His partner struggled to unwrap him, and then to dismantle the flagstaff;  they scraped narrowly onto the aqueduct and were lost to sight.
Posted by Dru Marland at 08:32