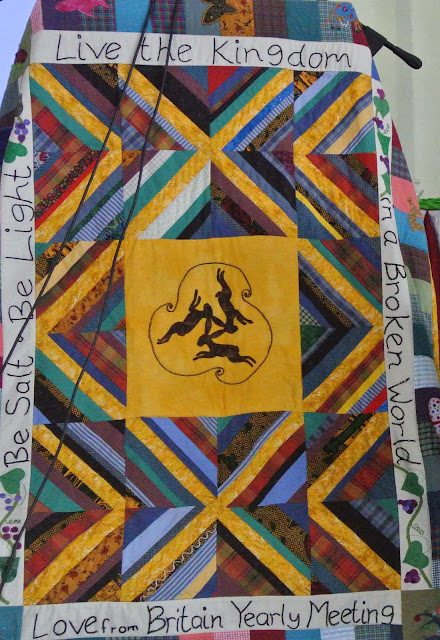 Bimbling along the Gloucester Road the other day, I bumped into Judi Brill at the Bishopston Trading Company, and we told our news. Judi's been over in Kenya recently; she took this quilt to present to the Quaker conference being held there. I was particularly interested in the presence of the three hares on the quilt; and as I (and hopefully you) am interested in the three hares motif, and the quilters have kindly given their permission to post the picture, here it is!

A Quilted Hanging of Greetings

We are following a well trodden path. This quilted hanging has been made to send loving greetings to all the Quakers who will be gathering at the University of Kabarak, Kenya in April this year from all over the world.

Many Quakers in Britain, have worked on it.The central blocks were made using Quaker men's recycled shirts. The diagonal 'strippy' blocks represent bursts of Light. The central medallion of three hares chasing each other is an ancient symbol adopted by early Christians to represent the Trinity. The same symbol is used in other faiths too. There are only three ears but each hare has two!

Three of the inner borders are embroidered with the words 'Be Salt; Be Light; Live the Kingdom in a Broken World' which is the essence of the title of the Conference and the fourth border has ' Loving Greetings from Britain Yearly Meeting'. The corners have appliqued trailing vines, another biblical reference.

The outer borders are strip-pieced, (a method called 'piano keys') using fabrics supplied by the Bishopston Trading Co.which is a Women's Fair Trade Co-operative linking India with the UK. For these borders the children at Yearly Meeting Gathering in Canterbury in 2011 drew British animals, birds, insects and flowers which were then bondawebbed onto fabric and applied to the hanging. The outer corners have the same tree in each of the Four Seasons.

We hope the quilted hanging will speak of Light and living sustainably, the Natural World and the Divine Presence in our lives.