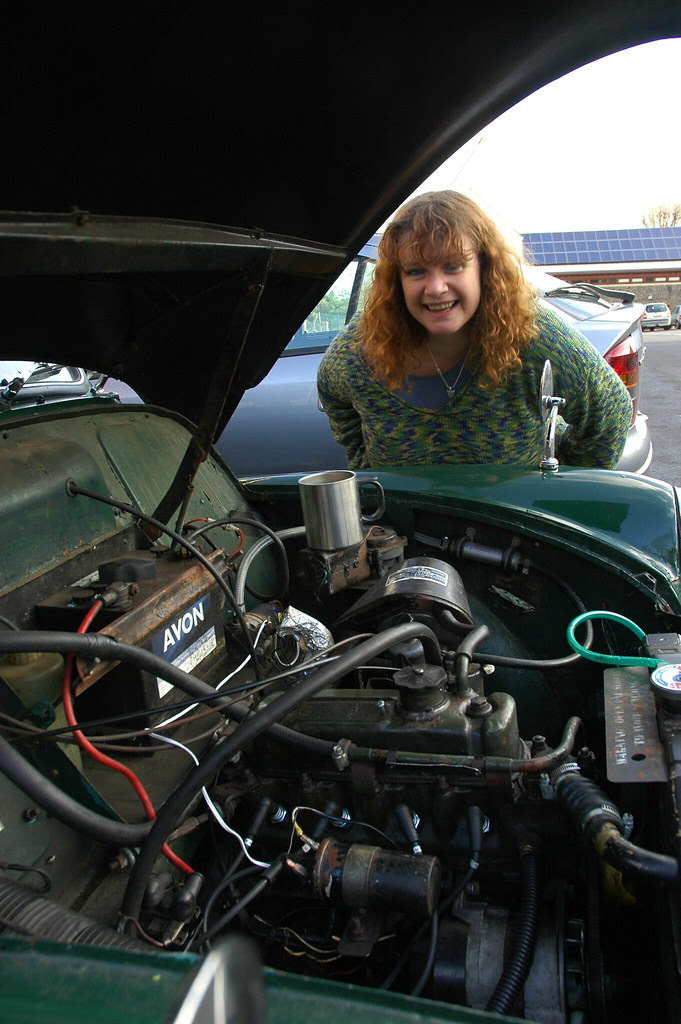 There was the steady shhhhh of rain on the car roof, like a short wave radio between stations; and the thunk of big drops from the eucalyptus trees that bordered the car park.

"What time do we have to be there?" I asked John.

"We have to put our names down by quarter to eight," he said. "Plenty of time."

It's nice listening to heavy rain when it's close by but can't get at you. As opposed to, say, listening to it on the hood of a jacket that is already soggy and promises to be soaked through very soon. I peered at my notebook and tried to make the words sound right. They were resisting.

John appeared out of the twilight. "I wasn't sure about tonight," he said; "But I've been working on the kitchen and could do with a break from it."

We set off, wiping the mist from the windows as we went, then wiping it off again as they were steaming up like nobody's business.

Passing through Westbury on Trym, the engine hiccoughed, and, quick as you like, I swung into the car park that was fortuitously placed just ahead of us. The driver of the car behind parped their horn to let me know how annoyed they were, as they sped up the steep hill out of W-on-T.

We listened to the uneven beat. I switched off the ignition, opened the bonnet, and sprayed some WD40 around the distributor and coil. Then tried to start the engine again.

There's only so much you can do in the dark, in the rain, with a dead ignition system. John and I heaved and pushed the car into a parking bay, and grabbed our bags and providentially-brought-along brollies.

I left a message on Deborah's mobile. "Sorry, we won't be there. Car conked out."

Ten minutes later, she called back. "Do you want any help?"

"Oh, yes!" she said brightly. "I'll be round first thing in the morning, before the traffic gets too bad."

I squelched home. My woolly parka, which weighs as much as two sheep, had become the weight of two camels by the time I got there; I was drenched.

Just as I'd added the whisky to the cocoa, John called. "I just got home," he said. "Popped into the Co-op for some milk, and then the rain eased off."

This morning broke sunny with the occasional spot of rain. I'd hardly finished throwing an emergency repair kit into a bucket when Deb phoned. "I'm on my way!"

"You'll have to tell me about towing," she said; "I've not done it before."

"Nothing much to remember," I said; "just keep the rope tight and go wide at corners. We may be able to fix it anyway. It'll either be something very simple, or something we won't be able to do anything about there and then."

A quick jab at the coil with the multimeter told the story; the 12V supply had failed. So I by-passed it with a wire across to the fuel pump (it's the white wire in the photo), and we drank our coffee while Deb told me about the evening at Halo that John and I had failed to get to.

And then we convoyed home, and the engine didn't miss a beat.

Onwards and upwards! Thank you, Deb!