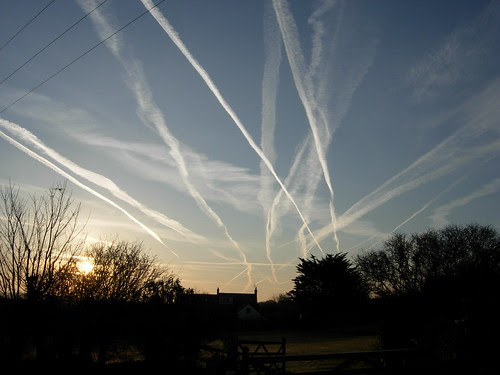 We'd been in the kitchen eating microwaved pasties for lunch, and I wandered back into the workshop with my mug of tea, ready to start up the lathe. The TV set up on the high shelf showed a New York skyline, high buildings haloed by morning sun. There were excited voices.

"Something going on," I remarked.

An airliner appeared out of nowhere, and in the few moments before it plunged into a skyscraper I recognised a Boeing 737. The television voices became even more excited.

"It looked like a small private jet", said a commentator.

I didn't know what it was, but I knew that something Very Big had suddenly happened, and that the world had changed.

Part of my reaction was a very selfish one; my life was so full of drama and angst that it seemed unfair that world affairs should intrude upon it and demand my attention too. My home life was falling apart; my partner was busily building herself a new life without me in it, but just for the while we were still occupying the same home, or at least two homes in parallel. I was worried about my relationship with my daughter; I wanted to spend more time with her, but felt trapped in the role of chief earner, and the bills and rent had to be paid. I was commuting to Dursley, a long haul up the motorway every day, to where I was working for a former colleague, a marine engineer, building specialist tricycles for people with special needs. He was not particularly sympathetic to the problems in my private life, making remarks such as "If she said 'shit' you'd jump on the shovel" and "You don't need surgery for something that's wrong in your head".

Because I was waiting for something to happen. I'd been to see my doctor that summer, describing my feelings about my gender identity. He'd been very understanding and helpful, and had set wheels in motion. But then the local PCT had responded, saying that they had no funding available for gender identity services, and recommending I go to see Prof Richard Green at Charing Cross, as a private patient. I was waiting for this appointment, which was another month in the future.

In the afternoon, we sat in the garden outside the workshop, taking a tea break. The sky was silent; Green One, the transatlantic air superhighway, passed directly overhead, and nothing was flying.

I thought about the future. The seemingly enormous gulf between where I was, and where I wanted to be. The forces of darkness, mobilising.