the smell of Jeyes Fluid in the morning 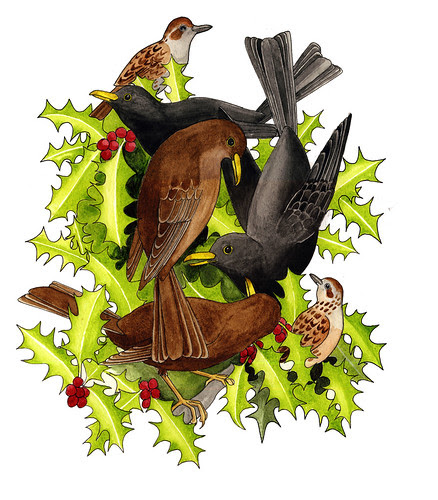 blackbirds in the holly, originally uploaded by Dru Marland.

I'm working on another book with Geraldine, and here's the first pic for it; the holly tree in her garden has a bit of a population explosion on the blackbirds front. The holly reminds me that I've seen the first Christmas things in the shops; rows of chocolate Santas in Sainsbury's, yesterday. Ick.

Closer to home, the roof started leaking in the heavy rain and wind we had yesterday. Very musique concrète, it was, the drops from the ceiling plinking into the buckets. I think I might make it a permanent installation.

I found a note on the stairs, from the landlady, thanking me for replacing the time-delay light switches.....

...so there's a note saying thank you, and a cheque for the cost of the switches. And a bottle of Liebfraumilch, LIDL's finest. Very kind, though Jeyes Fluid is better for cleaning the drains. But probably more expensive.