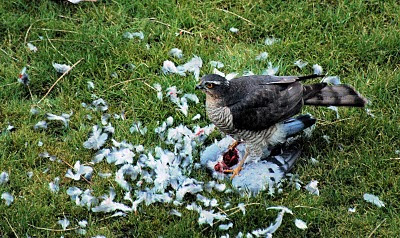 The local sparrowhawk has been busy. I put a pan of water on the stove because I was making penne al'arrabiata for dinner; then I peeped out of the window to see what was going on, and there it was, already eating its dinner. It was there for over half an hour; after it had eaten all the soft stuff it could get at from this stance, it rolled the pigeon over and resumed its eating. Then it flew heavily to the wall, carrying the remains with it; and after a short while it flew off to the local ash tree to relax, if sparrowhawks relax.

And yesterday I was at Clevedon with Jules, dropping off some books at Sealey's, the excellent bookshop on Hill Road. Then we took a walk around Poets Walk, looking for somewhere to eat our ham and bread roll, while rain storms swept by to the east. It was a dramatic scene. 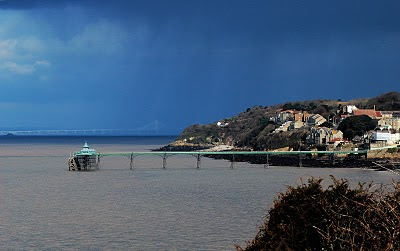 There was a sound unlike one that I'd heard before; if you put a cat and a bolshy baby into a tumble dryer together and turned it on (don't try this at home, gentle reader) ....it wouldn't sound like that either, but it would have the flavour of it.

I gazed around, and saw that a peregrine falcon had 'bounced' a black-backed gull.

They sailed off to the east, circling each other, the gull looking pretty annoyed and the falcon radiating insouciance. Then the falcon caught an updraft and spiralled swiftly up and away. 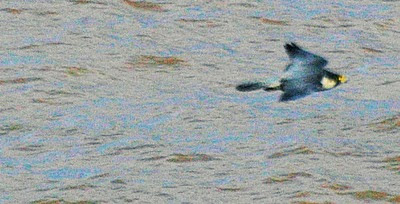