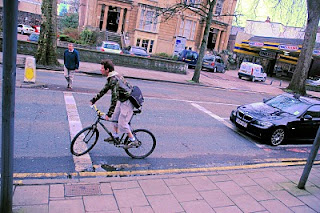 Here's an Advanced Stop Line. The idea behind it is that it gives cyclists space to wait at the traffic light, and gives them a head start on the cars waiting at their stop line. This greatly reduces the risk that a cyclist will be knocked over by a car turning left at the junction, as quite often happens when a cyclist is cycling alongside a car, or the car simply overtakes and swings left without warning.

Here's a useful guide to how they are designed and marked. As you see, it is usual practice to paint the box red and have a big picture of a bicycle on it, to give a clue to the motorist as to what it's all about.

But this ASL is on Whiteladies Road, one of the main routes into the centre of Bristol, renowned as a Cycling City, where motorists respect cyclists and share the road with them on equal terms; not only that but it's on the National Cycle Network, part of the prestigious Route 4 (London to Fishguard).

So obviously it doesn't really need the visual aids, as everyone knows what to do. 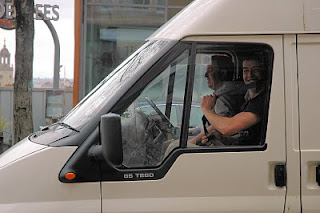 Everyone, that is, apart from the occasional simple country folk who have come up to the city for the first time, and aren't used to our fancy ways. Like these chaps in the van, who managed to occupy half the cycle lane and stop right on the ASL. I banged their mirror with my shoulder as I squeezed past (it wasn't deliberate, but hey), and they honked their horn at me, drove alongside, wound down the window and shouted that I ought to have to take a test.

They didn't specify what sort of test, though. Name the root vegetable, perhaps. After all, I've already taken tests in driving, motorcycling, flying aeroplanes and steering ships.

I in turn caught up with them at the next junction, and knocked on the window.

It was wound down.

"You were in the advanced stop box", I said. "It's for bicycles."

It helps to be polite. It's a hearts and minds thing.

"No, t'aint!" said the driver, incredulous that I should be so ignorant of the rules of the road as applied to White Vans.

And off they went, in haste for whatever it is that they get up to. Delivering sheep or something. 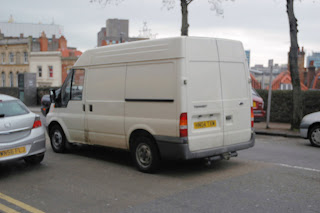 It was a normal sort of day in town. Here are some students stepping out into the traffic to avoid this van, whose driver had had a sudden urge to eat a sarnie and have a scratch. 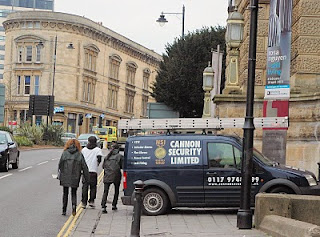 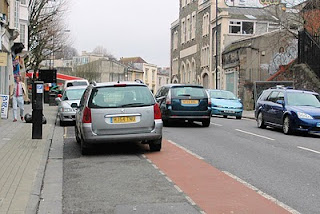