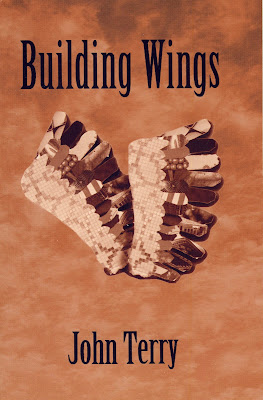 I knew this chap who could slaughter a pig, play the flute, quote by heart from Joyce. Oh, and he was the Chief Engineer on the ferry I was working on, too. But he was Irish. English engineers are usually a bit more philistine, in my experience.

John Terry, on the other hand, is a precision engineer who used to build wings for aeroplanes. And he's a poet, and all-round Good Sort.

We were down at the Arnolfini the other evening, for the launch of his new book. And a very good evening it was too (though Katie was drooping by eleven o'clock; it's hard to keep up when you're mixing with people who are mad, bad and/or dangerous to know...). John shared the evening with Penelope Shuttle, Esther Morgan, and Gwen Seaborne, so there was a lot of poetry around.

Oh, and Katie designed the cover. She was given a round of applause too!

Here's one of John's poems.

At least once a week, every week for years,

she'd kept on at him to clear the garage:

until one day he locked its up-and-over

from the inside and she heard the sound

of hammering, the clatter of metal,

the sudden shriek of his drill; the beaten

echoes of her own fist on the tarnished

The familiar lock rejected her key

as if she were a stranger. He never spoke,

not even to swear, never sang or whistled –

ignored the food she began to leave outside,

tapping lightly on the aluminium,

her fists grown too sore for aggression.

As winter approached she started to beg:

the house was lonely, the garage unheated.

How could he prefer concrete and the Flymo

to their Slumberland, her flesh under the duvet

yearning now as it hadn't done for years –

her nagging complaints filed down to trivia.

When all sound ceased on Christmas eve,

and nine hundred and ninety-nine police

forced open the door, they found a pair

fashioned from junk and pieces of the Flymo

with the word 'Hers' worked into the pattern.

There was a marked chart of migration routes;

and clear evidence that similar wings

had clipped the lilac as they flew away.

After the police had gone she scribbled a note

for the milkman, folded the chart to its first

section, and left the suburbs; flying up

through the gap in the lilac, heading south.