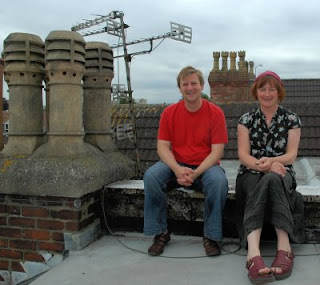 I tried to explain my early sense of wrongness, and how I had felt that I ought to be gendered female, and how that seemed such a daft thing to want, not least because (for me, and in part) it involved modifying a reasonably healthy male body. And how I had thought that most people shared the same ambivalence (or antipathy) about their own sex, and it was just something that everyone lives with. It was a relatively recent discovery that most people are really very firm in their gender identity, and if they don't realise or notice this, it is because they are so immersed in it that they don't see it. As Susan Stryker said, "gender is the medium in which we swim".

I also described how there were two important aspects of my transition; the physical change on my body wrought by hormones and surgery, which has made me comfortable in my body - I feel now that I inhabit it, rather than feeling that I'd found myself in the house of a stranger; and the social element, whereby I both present myself as a woman and am treated as one. Both aspects are imperfectly attained; surgery and hormones do the best they can, though, given the material they had to start with; and if people identify me as having a transsexual history, then it can cause them to behave differently than they would otherwise. Still, we make the most of what we've got, don't we?

Julian asked what I thought of Descartes' notion of the spirit as being entirely nonmaterial. I realised that I hadn't given the matter much thought. So I am doing now. My sense of self is strongly bound up with my physical body, as well as the mind that I was born with and which seems to have been delivered with a bunch of pre-installed software, such as (of course) gender identity, and a ragbag of qualities- innate abilities and weaknesses, the stuff we loosely describe as character or personality. My present self is the sum of all this and the experiences I've been through during my life, experiences that were mediated through the senses of my physical body.

I got thinking about what it was like in Heaven, as imagined by me when I believed in Heaven. I had a vague notion of it being a bit like Wales in the 1960s, with my parents and family and friends there already, ready to resume things from where they left off when they died. This model worked for me when I was much younger, but it's hard to imagine it now. I'm too old, for one thing. I'm now seventeen years older than my mother was when she died, for instance. And there are people I'm not sure I'd want to meet in Heaven, even if they deserved a place there.

I asked Katie to imagine it. "What would we be like in Heaven?" I asked.

Which is a good answer.

I am open to the idea of there being a spirit world, having had a few experiences of that sort along the way, but I've really no idea what goes on there. Maybe I'll find out one day, and maybe I won't. Trying to visualise it seems a bit of a waste of effort, not least because it can end up seeming a bit silly. I remember Milton, describing the war in Heaven in Paradise Lost, where the angelic armies are marching around in the sky decked out in Civil War period arms and armour. This seems a bit Disney, really. I saw that bloody awful film of Pearl Harbour, where they threw every bit of CGI they could at the story and it ended up much too long and much too absurd. I hope Heaven isn't like that. And then there's Raphael, coyly describing sex among the angels in Book 8:

Let it suffice thee that thou know'st [ 620 ]
Us happie, and without Love no happiness.
Whatever pure thou in the body enjoy'st
(And pure thou wert created) we enjoy
In eminence, and obstacle find none
Of membrane, joynt, or limb, exclusive barrs: [ 625 ]
Easier then Air with Air, if Spirits embrace,
Total they mix, Union of Pure with Pure
Desiring; nor restrain'd conveyance need
As Flesh to mix with Flesh, or Soul with Soul.

...which Pope in turn spoofs in Rape of the Lock, here:

....spirits, freed from mortal laws, with ease
Assume what sexes and what shapes they please

...which sounds a bit like Second Life, if you ask me. Crikey, would I want to spend an eternity in Second Life? -I don't think I even want to spend five minutes there, though at least I've still got my First Life to play with. For a while longer, at least.