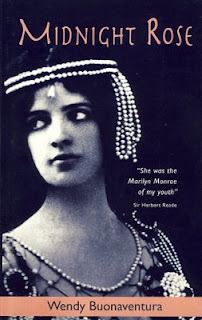 I've just finished reading Wendy Buonaventura's Midnight Rose, her account of the life of Maud Allen, an Edwardian era dancer famed (or notorious) for her depiction of Salome, and for the court case when she sued an MP for libel, after publication of an article called The Cult of the Clitoris, which suggested that she was a lesbian... Jolly good stuff, though now I must write a review of the book which goes a bit further than saying "jolly good stuff".

Meanwhile, over at Ian Marchant's blog, there's been talk of religion and of Welsh chapels, though not necessarily in the same breath.

And that reminded me of a poem by Idris Davies, and I just found my Big Book of Welsh Poems, so here it is.

And when they go to Heaven
They won't like that too well,
For the music will be sweeter
Than the music played in Hell.