I hate specialised words, especially if I don't know what they mean. But I've had to expand my vocabulary recently, to account for the clunking I was getting in the front end of the car.

After taking the wheels off and poking around a bit, I found out where the problem lay. Let's try describing it without using special language. The front wheels are bolted onto vertical shafts which can swivel, allowing the wheels to turn left and right. The top and bottom end of the shaft goes into a cup arrangement which is swivel-connected to the bouncy-up-and-down bit of the suspension. So the wheel can go round and round, turn left and right, and bounce up and down when it goes over a bump.

The cup arrangement is called a trunnion.

Here it is, look. A trunnion, complete with rubber bushes that are completely worn away. Clunk, clunk.

...and here is the reassembled bit where the wheel goes. It took me about four hours to get this far.

The worst bit was the joints that haven't been apart since the car was built, and which needed a blowtorch, release oil, joint splitting tool, big copper mallets, and a nice cup of tea and a piece of chocolate before they finally gave in.

It can be a bit dispiriting, looking at something that you know you have to undo and yet which is refusing to undo. I suppose that strictly speaking, there is always someone else ready to take a job on, but I prefer not to give up on something. Back in the seafaring days, it sometimes really was a case of having to fix it there and then, no option. It could be quite a dreadful feeling, looking at something which is steadfastly refusing to do what you wanting to do and knowing that there is no-one else to do the job.

Here's someone fixing something on a boat (Condor 10, somewhere in the Mediterranean). The buck stopped somewhere else on that particular occasion. 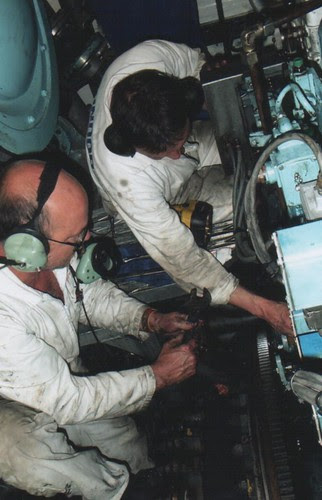