I've been very quiet recently. Thinking about stuff. The other weekend, I went up to Leicester for a little reunion party for the crew of Karen Bravo, a seismic survey ship that I worked on for a few years when I first went to sea.

When Toby (waving his arms around at the back there) put a Facebook group together for the old crew, I had mixed feelings about getting involved, however slightly. But I realised I'd forgotten just how good things were in those days, and what a nice bunch of people I worked with. As the years passed and I took to working in the engine rooms of ferries, I still met and worked with some really good people; but also some thoroughly unsavoury types- seafaring seems to attract the best and worst of kinds. And the last couple of years at sea were something of an never-ending struggle against bigots.

So it was nice to remember the good times. I signed up for the party, which used Tim's 50th birthday as an excuse. Hence the Leicester connection. Seafarers, present and past, converging from around the world to a landlocked Midlands city (though there was a canal close by....)

In a way, it was like returning to the crew mess after a month off and resuming the conversations and badinage that'd been left off on one's departure. Except that this time there'd been a 25 year break, and those familiar voices came from people who had doubled in age. Like me. It took a bit of getting used to, but we managed.

We talked about the stuff we used to get up to, always with strict adherence to Health and Safety regulations... 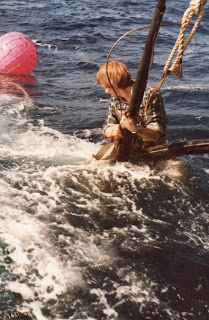 (...I recalled that, when I subsequently attended a survival craft training course at Warsash, I was shown a slide show of How Not To Do It, a chamber of horrors thing. Nearly all the ships involved had a familiar green and white paintwork. "Western Geophysical?" I asked the lecturer. He nodded his head wearily....)

"We've not changed at all," said Kev. In some ways we have changed radically, and possibly me more than most. But some things just don't change. It was an interesting experience. And we partied until long after midnight. That bit certainly didn't change.