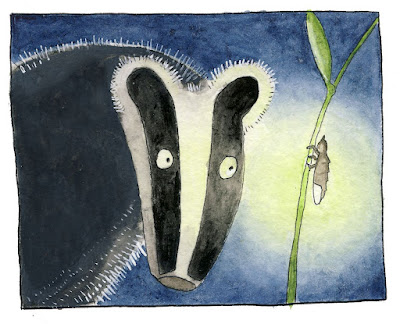 Since I moved up to Heron Tree on Tuesday everyone (well, several people) has (or have, as the case may be) been talking about glowworms, of which there is a plethora here, if plethora means quite a few. And I've not drawn a badger for a while, so there you go.

Before I moved onto the canal I had seen two glowworms in my life. One was in a hedge in Herefordshire, when we were walking back to our tents from the pub during a week spent strawberry picking after our O Levels. It was about the only time my red/green colour blindness manifested itself, as I thought it was a fag end and my friends said "But it's green!"
And the other time it was on a lane in Devon.

Since coming to the canal, I've seen 'em all over the place. The towpath resembles a flarepath with them sometimes, in fact, and you often have to jump out of the way as a Special Forces aircraft, on manoeuvres over Salisbury Plain, gets distracted and comes in to land and discharge commandos all over the place. Messy business, especially if they fall into the canal and have to be pulled out. 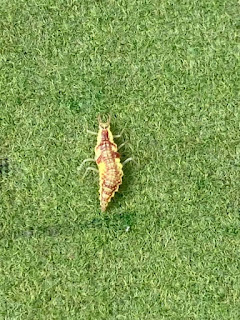 This little creature was walking along my arm as I sat outside chatting with my neighbour. Someone suggested it was a glowworm, but I really don't think it is*. It's quite similar to those ugly little ladybird larvae, though. Sorry, ladybirds, I'm no oil painting myself.

Canals are a valuable green corridor for wildlife. There has been criticism of the Canal and River Trust's mowing and hedge-cutting policy, the critics arguing that the CRT contractors cut swathes through rich habitats at entirely the wrong time, when a more sensitive and flexible approach would mean the plants could seed and the creatures mate undisturbed. They do seem to have taken this on board, and there are sections of the canal now flagged as glowworm habitats where mowing is limited or avoided.

*it has been identified as the larva of the common green lacewing, by a knowledgeable person in a Wiltshire wildlife group
Posted by Dru Marland at 05:57