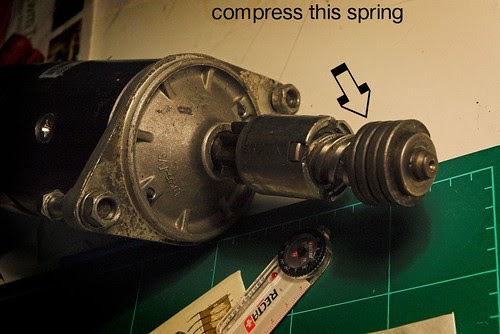 How to free up a jammed Bendix drive

Problems never come singly, do they? I was driving Katie across town the other day, for her Meeja course, and on the way home there was a faint sense of hiccuping from the engine. I pretended not to notice, because I had drawings to do. But that afternoon, repeating the journey, it developed into full-blown indigestion, and the engine kept cutting out, so that I was constantly juggling the choke and bump-restarting the engine as we coasted along. Katie was oblivious, as we'd stopped at Wai Yee Hong, the chinese supermarket, and she was munching her way through a box of Pokies while listening to her iPod, which was audible to me as that hissy sort of sound that was peculiarly annoying in the circs. So I stuck on Jean-Luc Ponty. Take that, popster!

Worry, worry. Was it the ingition system failing? I started with the simplest job- replacing the HT ignition coil with the spare one. No difference. I took the top off the carburettor float chamber. Loads of crap in there. So I took the carburettor off and stripped it down; the piston was grubby and prone to sticking. So I cleaned everything up and lightly lubricated it, and stuck it all back together, and it worked properly.

Then yesterday I was coming back from Mal's, where I'd been doing some chainsawing, and I'd just switched the engine off when I thought "I'll have a look under the bonnet, and check the mixture." So I engaged the starter. And, because the engine hadn't stopped turning, there was a horrible graunching noise.

I stopped the engine, and turned it over by the cranking handle. Graunching noise was still there.

Then I took the starter motor out, and checked the teeth on the flywheel.

Blessedly, they were both in fair condition; but the Bendix drive on the starter was jammed. The Bendix bit is that cylinder thing with the cog on it, on the spiral grooves on the shaft in the picture there.

After scratching head for a bit, I compressed the spring on the end of the shaft, using a couple of Mole grips. Then banged it a bit. And it sort of went SPRONG, and the Bendix relocated itself at the right end of the shaft.

And I breathed a sigh of relief. And cleaned the whole thing with surgical spirit, because Bendixes need to be clean and grease-free, otherwise it'll all end in tears again. This is what a healthy starter motor looks like.
Posted by Dru Marland at 06:20