Sometimes it feels like the other blog, Being Drusilla, is more the place for the 'official' version of things than here on Upside Down, where I still feel more at home. So over there are the, as it were, formal reports of the week just passed, and here I can do the more 'what I did on my holidays' stuff.

So. Last Monday I was up bright and early, and just getting dressed when wham! -I was hit by an excruciating pain in my middle. I creased up on the bed and waited to see if the waves of pain would go down. Last time something like this happened, I ended up in hospital having my gall bladder removed. At least I knew it wasn't my gall bladder this time; other than that though, it just bloody well hurt.

The pain slowly eased enough for me to get down to the doctor's just as soon as the surgery opened. He checked me over. "Pains in the leg? No? ....liver's OK," he said. "...are you feeling stressful for any reason at the moment?"

Apparently it was a muscle spasming, or some such thing. He wrote me a prescription, and told me to make sure I was there. Part of me was hoping he'd say it was out of the question, so I wouldn't feel guilty about not going.

So I did get to London after all. Bright and early, enough to spend the afternoon in the V&A. It was mildly trippy, what with the painkillers. Though the V&A can be a bit trippy anyway. Wandering around the cast courts reminds me of the bit in Easy Rider where they're out of it on acid in a New Orleans cemetery. 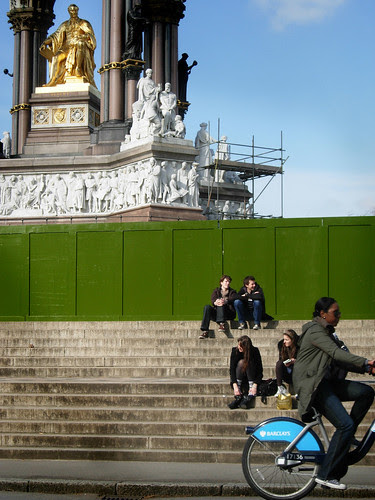 And then I met Richard and we wandered around Westminster, and finally to Channel 4 for the launch of TMW's 'Memorandum of Understanding', as described here. And I got to talk to some really nice people, some of whom I'd met before and some of whom I only knew online and had been looking forward to meeting at last; and some of whom were strangers. Of which latter category one or two had the idea that 'networking' means 'barking out your prepared mission statement and then moving on'. So I got to hear all about what they were thought or were engaged in, information which I instantly filed under 'F' for 'forget', while I remained a total stranger to them because I couldn't get a word in edgeways. Odd. Fortunately, these encounters were in the minority.

And I was on a bit of a high all the way back to Bristol. And not just from the tablets.

The other expedition was down to Plymouth. I was really looking forward to going down there, and I set off bright and early, just in case the car conked out. It went away to get welded a couple of weeks ago, and there's been a rather scary rattle going on ever since, which I knew I'd have to get round to sorting out, but hadn't quite managed yet.

On the motorway I found that if I approached 60 mph, the rattle began in earnest. It reminded me of that film The Sound Barrier, when the bold fearless etc pilots fly their Spits a bit too fast and they start shaking like crazy.

Though I don't think that the Trav would manage to break the sound barrier, even if I'd sorted out the rattle and then washed the car for good measure.

It skittered like heck if I hit a bump on a corner, too.

So it was a lively old journey. I stopped at Totnes, Hippy Central, to drop off my hippy boots for re-soling at Conkers. Then I bought the entire stock of preserved ginger from the Happy Apple, because they sell great buckets of it for £2.99, and you can't have too much preserved ginger; and I admired the gorilla up the tree who was dangling a bucket down on a rope to collect money from Red Nose Day. And the women dressed as witches. The trouble with Totnes is, it was hard to tell who was dressed specially for Red Nose Day, if you see what I mean.

Then to Modbury, where I wanted to take pictures of a grave. When I was working on a farm near here, twenty years ago, I was cleaning the paper and paint off a wall and found writing on the original plaster. After it'd waited there so long to be found, it was a shame that I couldn't decipher what it said, other than the name, Jane Lakeman, Ashridge Farm. But I'd found her grave in St George's churchyard, and I wanted to recall what it said on it, because I'm writing something...

And there were primroses in the hedge and in the churchyard, and as I was going into the church a chiffchaff started singing, the first I'd heard this year. 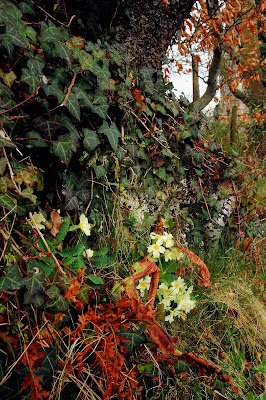 Traffic in Plymouth was scary, but I found the library and clunked gratefully into the car park to be greeted almost immediately by Sue, who was organising the reading. Which was really nice.

And so was exploring the city, especially the waterside. 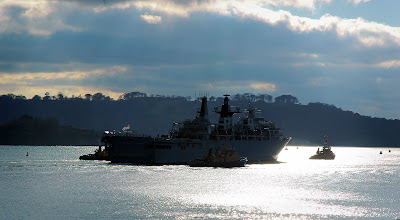 Unfortunately, we had to rush away in the morning, as Richard had family duties back home; and, because the rail service was disrupted by works, I was going to drive him to Taunton. The Sound Barrier effect wasn't as bad with him acting as ballast on the port side, I have to say. Taunton was big and complicated-looking, and there were no signs to say 'Railway Station'. But a police van turned into the road ahead of us, and I noticed that it said "British Transport Police" on the back. "Look! They will be going to the railway station; let's follow them," I said.

"How do you know they're going to the railway station? They might be going to the bus station. They might specialise in roads," Richard said. He was being a bit glass-half-empty about this, I must say.

"No, British Transport Police only deal with trains. At least, I'm pretty sure they do. Anyway, it's a plan, and a plan is always a Good Thing" I said decidedly.

And after a while, lo and behold we came to the station and the BTP van turned into it. "Words cannot describe just how smug I am feeling right now," I told Richard as I followed it into the short stay car park. He wisely said nothing.


Home again, I finally got round to giving the car a Serious Looking At. First I overhauled the Armstrong dampers, which are what people used to use before those big springy shock absorbers came along. 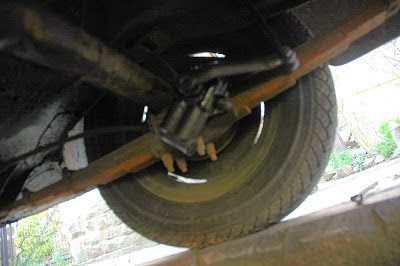 There's an arm attached to a piston, and when the arm moves the piston pushes against oil and forces it through a sprung valve, so that the motion is smoothed out. But after a while the oil gets manky and horrid, and some of it leaks out, and then you've got to think "I really ought to do something about the dampers." And then more time passes, and then a bit more, and.... you get the picture.

Doing the front dampers, I squirted oil into the filling hole and then rocked the car up and down to encourage the oil to go down. There was a creaking noise from somewhere. So I put my foot on the bumper and leant across and felt around under the wheel arch, while rocking the car, and wondering what people would think if they saw me doing this.

And I found that the nut that holds the damper arm to the kingpin was loose. And the bolt was creaking in the bush. If you see what I mean.

So I squirted loads of silicone grease in there and did it up. And now the car is much happier. And so am I.