This is a greater horseshoe bat. It gets its name from the shape of its snout, I think. I've been drawing wildlife for the Dundry project. I popped up there yesterday to take some panoramic photos, and stopped at the big Sainsbury's to bung our collection of plastic bottles into the recycling bin.
I heard an unfamiliar bird song; a bit like a sedge warbler but far more mellow. I spotted the bird up in an alder tree, and took this picture, which is not very good as a picture but is good enough for identification. So here is a siskin! -the first one I've knowingly seen. I was vaguely hoping that it would turn out to be a massively rare bird, but my big book tells me that they're all over the place. Part of me feels like you do when you get an e-mail from the National Lottery, telling you that they have GOOD NEWS ABOUT YOUR TICKET, and then discover that you've won £5.20.

And part of me thinks, ah! A siskin! -having only previously known the Armstrong Whitworth version. 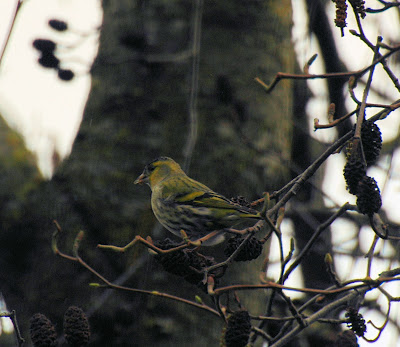 ...there was a lot of junk scattered around the recycling bins, in that queer magnetic way that happens with recycling bins. I guess that someone thinks, "Oh, what shall I do with this pile of old crap? -I know, I'll throw it on the ground next to a recycling bin."

And there was this drama being played out. You don't mess with a duck. 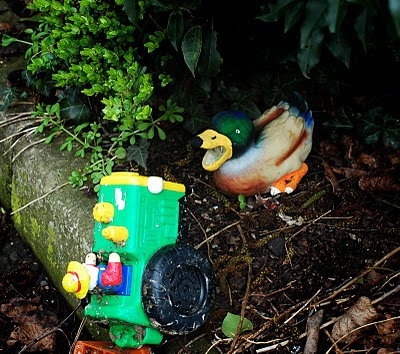