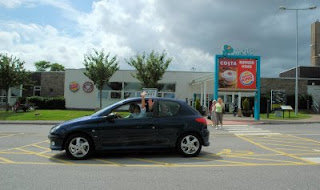 I drove up to the Midlands with Katie yesterday; she is away for the weekend. We were asked to give a lift to The Finest Swordsman In France, so we arrived punctually outside his house and rang the bell. And waited.

He finally appeared with his guitars, which we stowed in the boot, and I raised the driver's seat and ushered him into the back seat.

As far as Katie and I are concerned, the Trav is our car, and she belongs in the front seat. There seems to be an expectation that when an adult joins us, they should take the front seat and she go into the back. We agree that this is not fair to Katies, and have adopted a 'guests in the back' policy. Although, when they are her friends, she prefers to be in the back with them. You know how it is.

We stopped at a Tesco filling station and, after I'd put the petrol in, got some sweets for the trip. Finest Swordsman picked up a six-pack of Becks Alkoholfrei beer. "Gosh!" I thought. "Finest Swordsman is a changed man."

As we rumbled along the motorway, Finest Swordsman offered helpful advice about the car; "I think there's an exhaust leak," he said; "I can smell fumes."

Finest Swordsman is a bit of an expert about cars, as you may have gathered already. I filed the information about the exhaust leak in the appropriate folder in my head. F for forget.

I tried to make conversation. "How do you think Becks Alkoholfrei compares with other non-alcoholic beer, Finest Swordsman?" I asked. I am genuinely curious, because I have tried it and thought, "Yuk".

I wonder what he's going to do with the beer. For Finest Swordsman, a non-alcoholic drink is a drink wasted.

After the handover of passengers at Checkpoint Chav, just south of Birmingham, I returned to Bristol by way of the Wye valley, as it was a nice day and I am thinking about Wordsworth, and was seeking inspiration. I stopped at Redbrook, and walked over the old railway bridge to the Boat Inn. It's a good place to sit watching the river, and think, and drink. In this case, I was drinking a bottle of perry made by a local farmer, who calls it Capsy Wennet. The woman who served me told me that he calls her 'capsy wennet' too. You may recognise the name from Cold Comfort Farm. The perry was quite earthy and yeasty, but certainly interesting, though my stomach started making complaining noises later in the day 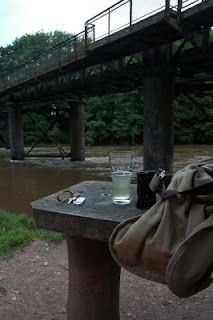 The pub was full of morris men. They were the Bathampton Morris Men, on a weekend tour. 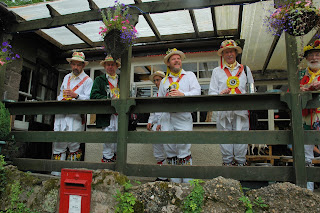 John joined me, and told me about it. They had already danced that morning in Chepstow and Monmouth, and were carrying on to Grosmont, where they would spend the night in the village hall, and basically dance and drink their way around Monmouthshire. A bunch of Will Kempes with a minibus. "A weekend without the wives and girlfriends," said John, cheerfully...

Tin whistles and accordions struck up inside the pub. The morris men were settling in and making themselves at home while waiting for their lunch. 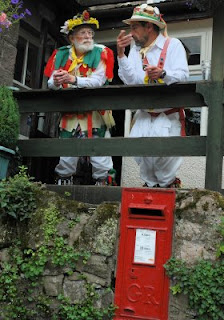 John and I talked about travelling across the Severn. He remembered going on the ferry when he was a boy, lumbering along in the family Morris 8 hoping to catch the ferry before the tide fell, and the alarming descent of the slipway and across the boat's ramp onto the ferry deck, where the car would be swung on the turntable and moved back into position for the crossing.

A kingfisher flew low across the river, which was brown and in spate; there's been heavy rain in Mid-Wales, evidently, and the Wye can rise very rapidly indeed. The pink flowers of overhanging Himalayan balsam dipped down towards the floodwaters.

John also remembered the building of the Severn bridge; the box sections, built in the shipyard at Chepstow, floated out and raised up onto the supporting cables. He described how the big towers at first leaned outwards, and as the cables took the weight of the box sections, the towers leaned further and further inwards until they were vertical.

Then one of his comrades called across; "Bill! The food's ready!"

"I didn't know how you were getting on with the lady; I thought you might want to be Bill", said the other chap.

And so we parted. I liked John. Or Bill. 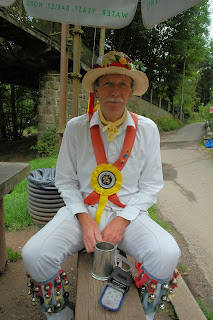