replacing the rudder stock bearing on a narrowboat 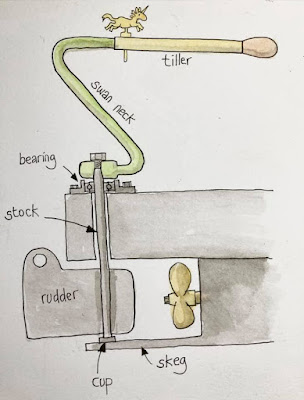 The rudder was getting very wobbly on Eve; lots of play at the bearing, and graunching when the tiller was swung. So I got the tools out and got stuck in.

Before taking anything off, I put a rope through the hole in the rudder and secured it to the stanchions. Because you really don't want your entire rudder falling down to the bottom of the canal.

Pulling off the swan's neck was hard work; it's secured to the rudder stock by a large bolt, and sits on a tapered shaft. After many years in place, it was reluctant to come off.

After several attempts at levering, I succeeded by using a bottle jack, pushing against a pry bar secured to the swan neck by heavy chain, like this. 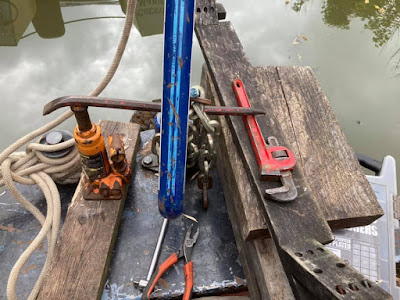 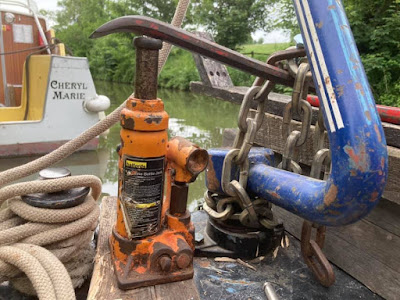 I pumped up the bottle jack till everything was bar tight, then rapped the side of the swan neck with a hammer. And it popped off.

Sometimes there'll be a Woodruff key down there too, but not in this case. In fact, this arrangement is identical to that on my old MZ motorbike clutch, which sat on the end of the crankshaft on a taper just like this. 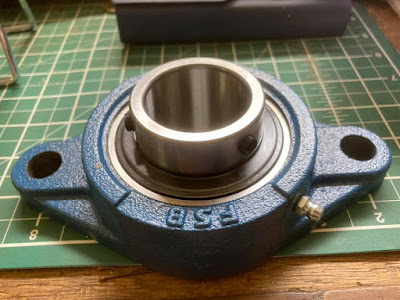 Before I went any further, I made sure I'd got a replacement bearing to fit in place. I used the information on the cast bearing housing, which told me that it was an FL208. This gave me all the info I needed; otherwise, knowing the stock diameter (this one is 40mm) and the distance between the securing bolt holes, should give you all the info you need.

The bearing is held to the stock by two grub screws. The easy way to take the bearing off is

clean the shaft above the bearing with emery or a file, and oil it; this makes it easier to take the bearing off when it starts to move

Raise the rudder a little, enough to insert wedges under the housing

Rap the top of the stock with a hammer (I used a copper mallet).

If you're lucky, this should get it moving.

I wasn't lucky, though, and it showed no sign of wanting to go anywhere at all. (In fact, I clouted the top of the stock rather too vigorously, and ended up needing to dress it and the thread inside it, later. )

So I used a disc cutter to slice down the bearing, taking care not to cut into the stock. I also took care to cover over the bolt holes, as they go down into the fuel tank, and I didn't want to blow myself up. 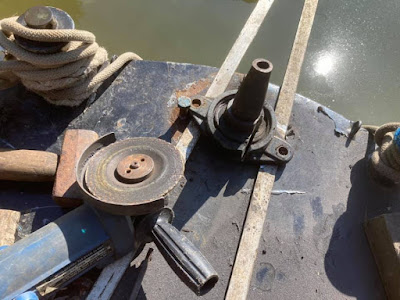 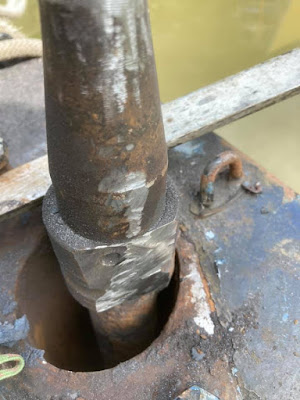 ...and then I used a puller to slide the now loose bearing off the shaft. 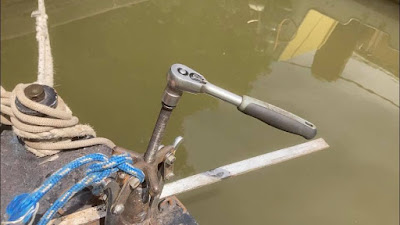 and there it was, safely off 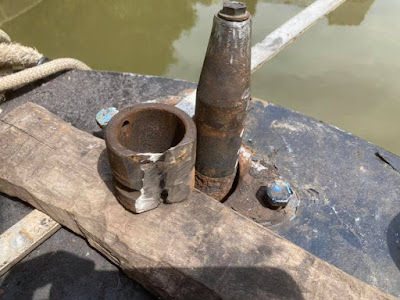 Next, clean everything up, and push the new bearing into place, having liberally greased it 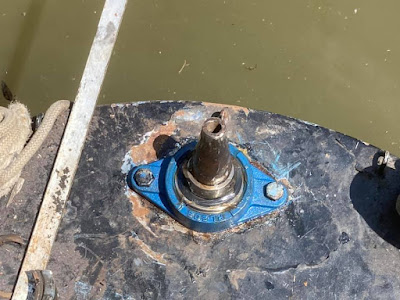 I also added the plunger that I usually use to unblock the sink, to keep the rain out. 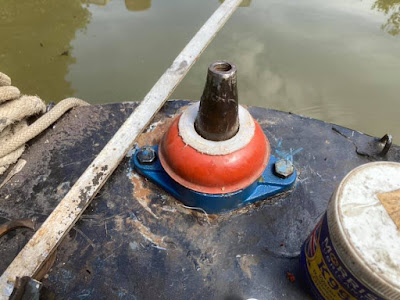