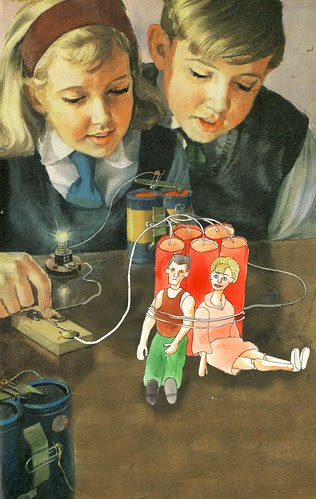 dismantling the gender binary
The final episode of My Transsexual Summer was broadcast this week. How did I feel about it? It was certainly flawed. The annoying voiceovers continued, along with the focus on surgery; we are told that Karen, who was shown undergoing surgery in the first episode, is "now... the woman she always knew she was"; Lewis is seen counting the money from a benefit gig, because "the NHS refused to pay for (his) surgery, so now he's got to raise £5000 to go private". This conveniently erases the advice given Lewis that the decision by his local PCT could (indeed should) have been challenged and overturned. Advice that was given in front of the camera but edited out. Because it makes better television to have a heartwarming scene of plucky young things putting on a gig to raise funds. All very Cliff Richard, indeed.

And then there's the gender normative aspirations. A closing scene has the seven subjects posing for the camera with something to symbolise their hopes for the future. Karen, who has been working as a lorry driver and evidently finding it a challenging environment, poses as a secretary, holding a mildly submissive pose with a notebook and pencil. Donna holds an inflatable male doll, to symbolise her hopes for a relationship. Drew wears a beautician's tunic. I wince. As I do when Fox has a night out with the lads, in Brighton, and is seen shouting "Orright darlin'?" at women on the street.

Still, should we expect them to be other than this, 'better' than this? Three observations:

Looking on the bright side, some insights manage to sneak past the vanilla curtain. Max queries the "assumption that when you can pass enough, you're no longer trans". And Sarah's insight, so early on in her own journey, that "the key to successful transition comes from within, is to be happy".

Reading tweets about the programmes on #transsummer, the response to them from outside the trans community seems overwhelmingly positive. So hurrah. For many people, trans folk are something almost mythical, not knowingly encountered in everyday life, and so liable to be casually 'othered' by unthinkingly going along with the lazy stereotypes that abound, such as the Little Britain 'trannies'. In this series, we have seen the seven participants being human; and encountering bewilderment, hostility and casual discrimination; like the woman who decides not to let her vacant room to Sarah because she doesn't want bricks thrown at the house; or the potential employers who turn Drew down because they are afraid of what their customers may think. I think that this sort of treatment, encountered on a daily basis by so many trans people, may have come as a surprise to some viewers.

And then there's the sense of empowerment that comes from a sense of community, of belonging somewhere. Drew was quite moving when she described her fearful and lonely life, when she thought "all I'd ever have is being stared at badly", and comes to the realisation that "these are my streets as well as anyone else's".

For my part, having watched this, I was inspired to get involved with the newly-forming support group TransBristol. Just sayin'. If you identify as trans*, and are in the Bristol area, do join in!