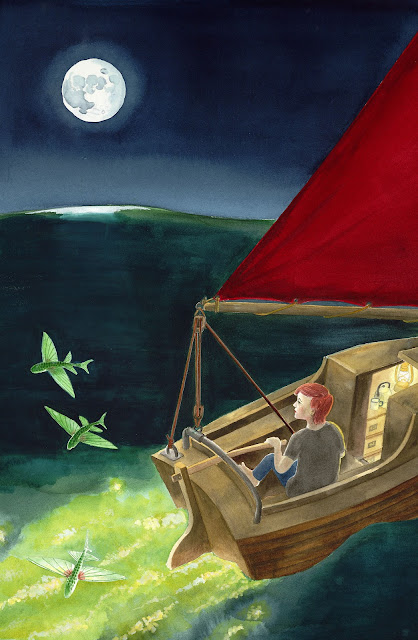 Sometimes, it's nice to do something a bit different, and paint a picture from your imagination. I did this picture last week; I saw flying fish and phosphorescence in the Indian Ocean ten years ago, and I used to have a little boat rather like this one, and still have the storm lantern. But that's as far as actual events go. That's the House Teenager there at the tiller....

There's a print of it over on Etsy. Here's the first flying fish I ever saw; it had landed on deck during the night. It wasn't long after that I saw groups of them, flying out of the way of the boat as we zoomed along; their wings stretched out tight and shiny in the sunlight. ..and this is a drawing of plankton flashing as we zoomed by; I think this is called bioluminescence, and I don't know enough about it to know if it's a different thing from phosphorescence.... it was like silent fireworks, exploding underwater. And, like so much else far out in the ocean, it was something rich and strange.