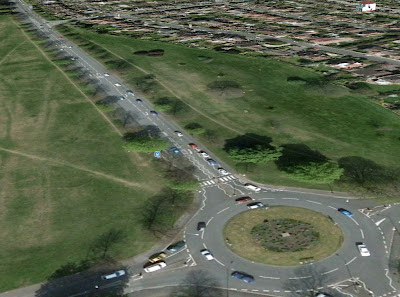 There have been some changes on the local roads here in Bristol. Just around the corner from me, the Westbury Road (see picture)  has had one of its three lanes re-designated as a bus lane. In the screenshot above, you can see the former configuration. Between the White Tree roundabout and the Henleaze Rd junction (top left), the centre lane was divided between a right filter for the northbound traffic, and a right filter for the southbound traffic.

In this picture, typical of an off-peak traffic flow, we see


The southbound right filter lane did, though, prove to be very useful for people in a hurry. Never a journey would go by without my seeing someone charge down the right filter lane, then go straight across the roundabout, forcing their way into the southbound stream, a manoeuvre that involved a hard acceleration into the roundabout and close scrapes with both the cars using the correct lane procedure, and pedestrians using the zebra crossing that's just out of shot in the lower right corner.

It was quite a fun game, actually, guessing which car in the right hand lane would do it. White vans, taxis, Range Rovers, and anything black and shiny were, of course, top of the list of candidates; and, on the rare occasions that they actually did turn right, I would reflect that I should work harder at overcoming my prejudices. So it could be morally improving as well as entertaining.

Now, the entire middle lane is dedicated to southbound and right-turning traffic The southbound left hand lane is now the bus lane, with a left filter for non-bus lane traffic in the section close to the roundabout.

Driving south the other week, I was surprised to see a couple of people on the adjacent pavement, waving placards objecting to the bus lane and handing out leaflets inviting drivers to sign a petition. I was surprised, because the new road configuration seems to be a much better use of resources than the previous one.

And then I got an e-mail, also inviting me to sign the petition, with the explanation that

Hiya
I had this link passed to me by a Henleaze Parent. If you have a strong view about the new bus lane, the petition needs signing soon, as it closes on 19 July.
L**

I'm a parent, though only a lower-case one. I imagine that to qualify as a Henleaze Parent With A Capital P, you need to actually use a large car to take your children to school and to all their social engagements. This supposition was further reinforced when I looked at their Facebook page, where one commenter complains about the journey time to a Bristol school, from the motorway.Though obviously they're not a Henleaze Parent, other than in spirit.

I do have strong views, but the course of action that those views lead me to is not the signing of a petition. Unless it's a counter petition to say how good the bus lane is. Hence my writing this.

I replied to the e-mail, explaining my position. I was heartened to see another dissenting opinion expressed by S*****, who has found cycling along that section of road much better and safer than it had been (it's not on my normal cycling route, but on the one occasion I did go that way, I was favourably impressed too).

People advantaged by the bus lane:


People disadvantaged by the bus lane

postscript: The This bus lane is madness Facebook page doesn't seem to like dissenting voices; my friend Liz had her observations deleted. Mine lasted a little longer, but disappeared after an anti-bus lane driver (and evidently queue-jumper) apparently condoned illegal driving and put the blame for it at the door of the Council. Since it's so interesting, I reproduce it here.

SC: Once you were perfectly entitled to use the right-hand lane for the top of Black Boy (sic), before they changed the priority.

DM: ...looking at the historical imagery on Google Earth, the right-hand lane appears to have been consistently a right-filter since 1999, the earliest historical layer on GE.

SC: I think this is one of the unreported side effects of continual council interference - driver frustration that can then lead to people having contempt for the rules of the road. Its most obvious form is people jumping red lights (after the green period has been markedly reduced) which is getting more and more common. BCC is at fault here. They are a joke and a growing number of people are clearly ignoring their diktats. I've even seen people cutting corners by driving over the Downs.

DM: The belief that one is above the law is nothing new - do you remember that Cabinet Minister under Thatcher, who got nobbled for a flagrant disregard of the traffic regs, and gave his opinion that 'rules are for little people'? Who the heck was that? Refreshingly honest, anyway; and nice to hear similar frankness from you! 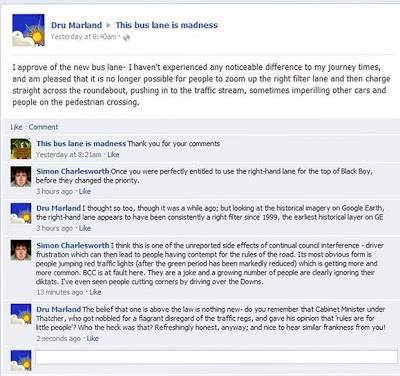