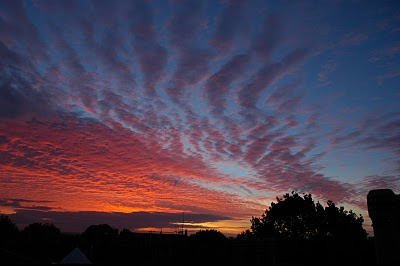 There was a terrific sky just before dawn yesterday, and it reminded me of the sky in Evelyn Dunbar's wonderful picture A Land Girl and the Bail Bull. Though by the time I'd got up onto the roof with my camera the sky had reddened with the imminent arrival of the sun at the horizon. But you can still see it, can't you?

Another motorway day, picking up Katie. So we came down the Welsh border on the way home. With rain threatening, swimming in the Wye didn't seem appealing, so I proposed a visit to Chepstow Museum, to see the exhibition of paintings from the days of the Wye Tour.

Katie was quite emphatic that she didn't want to go.

We went anyway, because I am still bigger than her. Just.

The woman on the desk at the Museum asked if we were coming in out of the rain.

"No," I said, "It's not quite raining yet, and we actively want to see the exhibition".

There were lots of people in there, and the exhibition is in a small room. The pictures are packed in close together, because the space is limited and they have therefore pragmatically decided to display the pictures in similar manner to the way they would have been exhibited were it the late 18th / early 19th century. So there was lots of good stuff in a small space. I occasionally called Katie over to look at something, and she would give me a Look and ask me not to do that.

I tried to guess who was in there because of the weather, but failed. There was one bloke in a beard-and-Tilley-Hat who positioned himself in such a way that you couldn't see the last six pictures properly, and adopted the deeply contemplative manner of one who is inwardly calculating the time remaining before he could decently go to the pub. I peered around him for a bit then gave up. He was quite wide.

Outside, two people were sketching the front of the museum. I furtively took this photo because if you ask people if you may take their photo they tend to get self-conscious. I wish I'd asked, now. Then I might have got a picture without the tourist information sign growing out of her head. 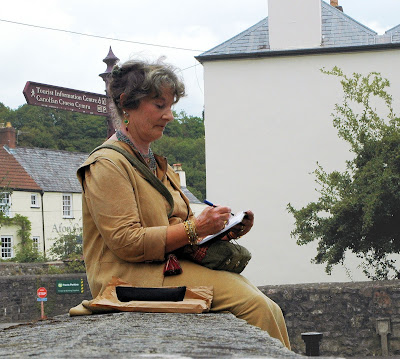