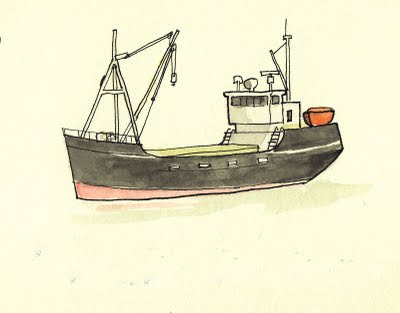 A quick look at life in Portland in May 1997. I was working on MV Havelet, a ferry that had been retired from the Channel Island run and which was now tied up in the former navy base, waiting to be bought by somebody. There was a small crew of Poles- a bosun, a deckhand, a greaser and a steward- there was Jim Nelson the Chief Engineer, and there was me. It was a fairly relaxed time, tinkering with stuff that wasn't working, and eating the awful food that Roman the steward produced- chickens deep-fried whole, indeterminate soup of a gray colour with gobbets of Stuff in...

With the Royal Navy pulling out, Portland had become very quiet indeed. Wildlife had begun re-colonising the dockyard; seagulls were everywhere, and the bridge wings were littered with the bits of seaweed that I think are what seagulls use as love tokens, rather than boxes of Milk Tray. The security guards in their little hut by the gate had made friends with the local foxes, who used to sit in the hut and share their sandwiches.

At the other end of the dockyard, Cable and Wireless had set up shop, and there was some activity around a floating dry dock that had sunk. Apparently, the pump that kept the water out had either been switched off or tripped, and the night watchman had just watched it settle lower and lower in the water and go under. Attempts to refloat it had failed, and it was being cut up and removed bit by bit. You can see the big floating crane that did the salvage work, Norma, down there in this picture . 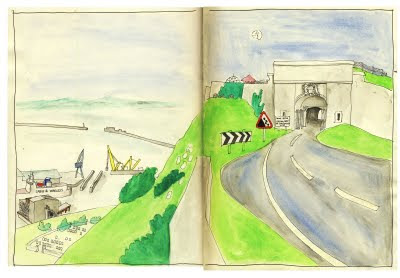 Also down there is HM Prison Weare, a floating prison which had been used as accommodation in the Falklands.

Sometimes things would be livened up by the appearance of the SBS, who would come down and practice assaulting ships. They didn't wear uniforms, because they liked to be inconspicuous. But a trained eye could pick them out, as they arrived in the biggest 4x4 you ever saw in your life, with a matt black paint job, smoked glass windows and heavy mesh over the windscreen. 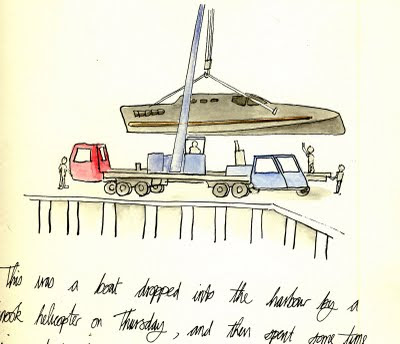 This is a speed boat they were playing with. It was dropped into the harbour from a Chinook helicopter, and spent the afternoon haring around with helicopter in pursuit, presumably trying to pick it up again.

And this is British Telecom's CS Sovereign, a cable-laying ship that sat alongside us waiting for a job to come along. We were grubby and rusty; Sovereign was pristine, and periodically large groups of men in spotless overalls would appear on the deck and sit in a big circle drinking tea in the sunshine, before going back in to re-polish something.