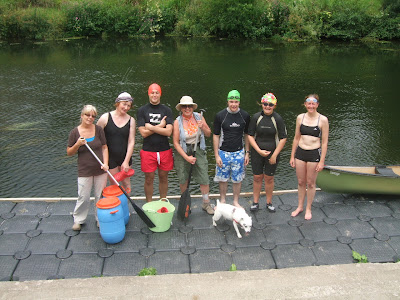 Sunday saw the latest swim along the Avon, from Dundas Aqueduct to Warleigh Weir. We called it the Sally In The Woods Wild Swim, because it's quite wooded along this valley, and there is a place called Sally in the Woods, just up the hill from here. Something to do with a Civil War skirmish, apparently. And it's a neat name.

We came along with canoe, dog, picnic and numbers. And on the pontoon, we met Tanya who had come along independently, intending to swim this stretch of the river on her own. There she is, on the right of the group picture. Very intrepid. 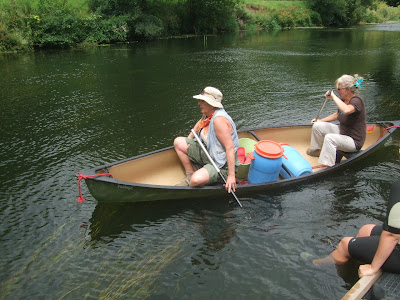 Mal and Brendagh embark in the canoe

Finally, I got to swim rather than canoe. It was rather a challenge; I'm a slow swimmer at the best of times, and everyone else in the water was both young and very fit. As they drew progressively further ahead, I admired the purple loosestrife that flowers abundantly on the banks. And the conkers weighing the chestnut branches down over the water. And the yellow globes of water lilies. And then I admired them all over again. I had plenty of time to. 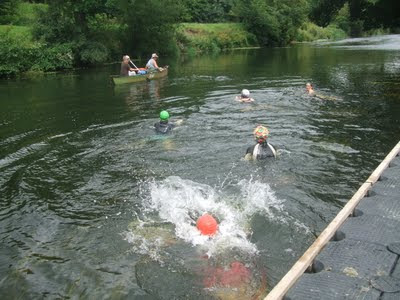 A kingfisher broke cover, flew down the river a hundred yards, then crossed over and arced round behind me, evidently concluding as it went that I was a fish too large to catch.

Half way along, there is a rather daunting bank of reeds stretching right across the river, and trailing weed too. It tangled my arms as I tried to swim through it, and I tried not to get too panicky. It was an unpleasant sensation. I found that it was easier if I went through on my back, sculling with my arms. You may thank me for that tip, one day. 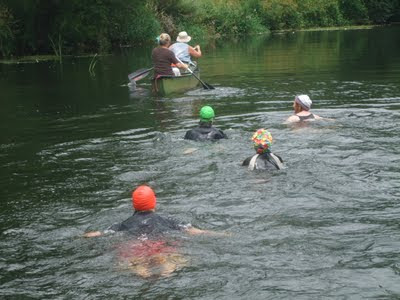 Towards the end, I was getting extremely tired and a bit crampy, and started looking for somewhere to get out; but instead, I gratefully accepted a tow from the canoe. Around the corner and in the distance, people were jumping out of trees and generally messing around in the river. We had made it! 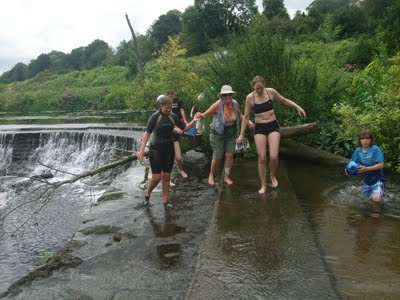