spirit in the sky 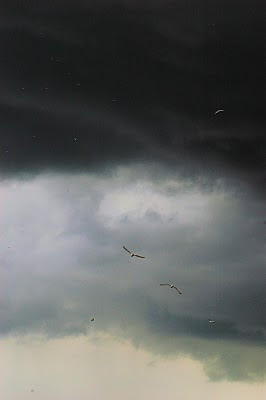 There was distant rumbling of thunder. So I popped up onto the roof.

The storm was moving in from Somerset. Against the great heap of dark cloud was a wheeling cloud of seagulls. More were flying in from all points of the compass. The whole sky across the city became one great seagull party. There was a terrific crash of thunder, and an almost instantaneous flash. Then the rain started, and I dived through the skylight.

Sometimes you just see something and you have no idea what's going on, but just have to gawp and admire. Like the bobbing gannets in the Bay of Biscay, or the night off the Ebro delta, when I was leaning out of an after hatch on the ship during a thunderstorm, and every flash of lightning caught innumerable fish, poised mid-leap in the air.

World is crazier and more of it than we think,
Incorrigibly plural...