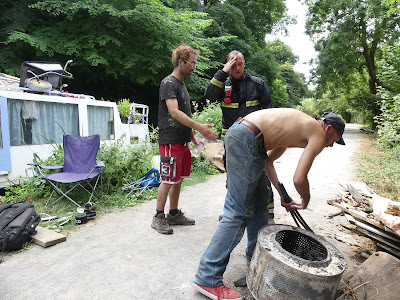 Yesterday a man walked by talking in a Complaining Voice into his telephone. “...they’ve got a fire on the towpath; it’s making a LOT of smoke and it’s hard to get past”

Ten minutes later we hear a NEENAH NEENAH and a fire engine appears on the little road that runs below the canal alongside the Avon.
I cycle along to Smelly Bridge where a solitary fireman dressed in all the gear is looking all about. And looking a bit harassed, to be honest. Those firefighters' suits are not the best wear for a heatwave.

A couple of boaters had been doing some home improvements and burning off the old wood in a furnace that was previously a washing machine drum.
The fireman and boaters seemed in perfect agreement that the call-out had been a bit of an overreaction, and he went on his way.
There are some spectacularly untidy boats along thus bit of the canal (heck, you’ve seen my boat?) -and Bongo George’s encampment at Smelly Bridge is very much disapproved of by folk who would like to keep Wiltshire a game reserve for the polite middle classes...
Posted by Dru Marland at 07:38