The tsunami of the industrial revolution swept up the South Wales valleys, and, slowly receding, left long ribbons of towns, and the flotsam of housing estates perched improbably above the valley floor, jostling into the steep hills and tributary valleys where the modest welsh hill farms still huddle behind the humped hawthorn, and the beech woods go on for ever.

...such were the thoughts that went through my head after Deb and I had done a Useful Errand in Risca, and decided to take the picturesque route back to Bristol.

There's a rare cross valley connecting those of the Ebbw and Afon Lwyd, running between Crumlin and Pontypool. It was once a beauty spot, with lakes and woodland walks. Then Hafodyrynys colliery  punched into its side and spilled the slag all along it. But the woods are still beautiful. So that's the way we were headed.

In Crumlin I said "Turn left down here! Let's have a look at the Navigation!"

And so we did. Down the track, one of the few collieries still standing was ringed by very modern linked fencing, like you get at festivals. But the gate was open so in we went. The Navigation was saved because it is listed. It is quite a harmonious group of buildings as you can see. But having been saved, there's always the problem of What To Do With It. Last time I came here a few years ago, a builder had taken occupation of it and put up a helpful sign saying PRIVATE PROPERTY FUCK OFF.

...though that particular cuckoo has apparently flown the nest.

By the far left building were a couple of cars, and a sign advertising a market. We were intrigued, and parked up. A harassed looking woman emerged and told us that the market had been yesterday, and we shouldn't be there. But she relented enough to let us peek into the derelict building, under whose open-to-the-sky walls were ranked some improbable market stalls, and four people wrestling with a gazebo. We waved a farewell, and wandered around the foot of the colliery.

"When I first came here in about 1969, it was as though they'd just downed tools and walked away," I said. "Paperwork all over, and the big winding engines; you could just wander around wherever you liked."

The sad little market stalls amid this dereliction reminded me of a painting in Bristol City Museum's collection; oriental markets in the ruins of past civilisations. Though my memory played me slightly false; here are the pics I was thinking of. But you get the idea.

Our musings were interrupted at last by an outraged shouting. It was the woman from the market. "Don' you go taking photographs! You should come on the open days for that. It'll cost you £10! Sneakin' in yur sneakily..."

"Baksheesh!" I said as we drove up the hill and away. 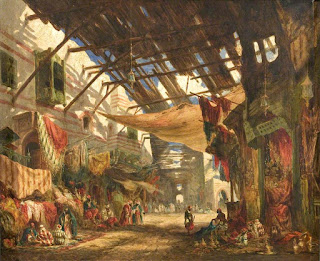 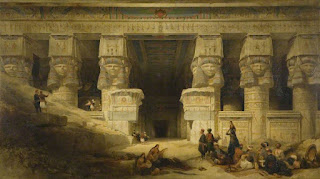 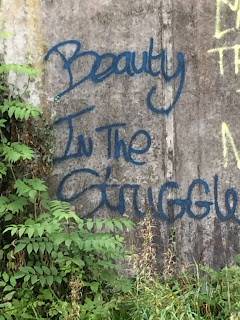