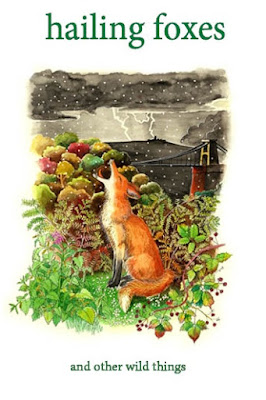 On Tuesday 29th September at Bristol Central Library, we'll be launching Hailing Foxes, a new illustrated poetry anthology, as a part of Bristol's poetry festival. Here's what the book's all about...

Unseen in the street plan of any city run the paths of the wild creatures whose lives are lived alongside ours, and which occasionally cross our own. And sometimes a door will unexpectedly open to that other city,  showing us something startling and unforgettable; foxes, falcons, mice, whales, balloons, reckless pilots, lost ships. All we need to do is pay attention.

Hailing Foxes follows Inking Bitterns, our previous book of poems and pictures about wildness; and this time we look at what’s around us in Bristol, in this year when the city is Green Capital.

Here's what you'll get at the library that evening: further details over on the Poetry Can website

Rachael Clyne is an artist and a poet, who lives and works in Glastonbury. Trained at the Bristol Old Vic, Rachael was, for many years a professional actor on both stage and television. She then became involved in work with cancer patients and families, setting up London’s first cancer support centre, now celebrating its 30th anniversary. This work led her to train as a psychotherapist. Rachael is sustained by her creativity as an artist and poet and is also passionate about ecological issues and love of the land. Her published books include her poetry collections: Singing at the Bone Tree and She Who Walks With Stones.