a flight out of Bristol

At six o'clock on a summer's Sunday morning, Bristol docks are quiet and still. Only a few late drunks still shouting at each other in Millenium Square, and, down in the amphitheatre, Phil and Allie Dunnington, balloonists, and Mal and Ade, gently pulling out an apparently endless stream of red balloon material from a big bag.

Allie gazed at the sky appraisingly, and considered the wind direction. "The Met Office website reckoned nor'easterlies" I offered, having checked before setting out. "I'll send up a trial balloon" she said, and filling a party-sized balloon with helium, let it go. We all paused and watched as it ascended practically vertically; then a few hundred feet up, it made its mind up and turned gently southward and disappeared in the brightness of the sky. "Good," said Allie, and conferred with Peter over the map. "Maybe we can land at Settle Hill. There's a small landing strip up there; it's a good place." She talked with Lulsgate airport on the radio. "It's always as well to let the airport know what you're up to," said Peter.

They fired up a petrol-engined fan to inflate the balloon. Allie wandered around inside the envelope, making sure everything was in order. Then she fired up the gas burners and the balloon rose up, swinging the basket upright. "Hold on to the basket, but whatever you do, don't let your feet leave the ground" she warned. Having seen that rather unpleasant film Enduring Love, I needed no dissuading from that particular ballooning faux pas.

Mal and Ade scrambled in, and they were off, and the arena, that had been so full of balloon a moment before, was suddenly very empty.

"Would you like a hand at the other end?" I asked Peter. "Oh, yes! All hands welcome; thank you!"

So we set off in pursuit. Near Hengrove we pulled over. The balloon was drifting over the former Whitchurch aerodrome. "We landed there once, took us ages to get out", said Peter; "It used to belong to the Council, now there's some private security company involved."

Whitchurch was home base for BOAC's overseas operations during the Second World War; it was on a flight to here from Lisbon that Leslie Howard died in 1943, when the DC3 in which he was a passenger was shot down over the Bay of Biscay. 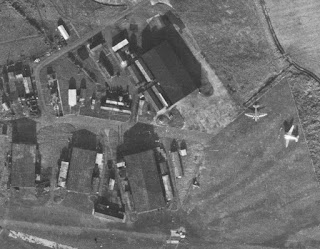 
"We don't like to get ahead of the balloon," said Peter, "in case it comes down unexpectedly." He considered the map, and chatted with Allie on the VHF radio. "I'll do a practice landing approach, and then we're looking good for Norton Malreward," she said.

We dropped down the long hill on the A37 and were just in time to see the balloon touch down in a big meadow next to the road.

That was the end of Mal and Ade's first flight in a balloon, and Allie's 699th as pilot. ...and the berginning of the transformation of the balloon from a lighter-than-air creature to something Very Heavy And Bulky Indeed, when you have to hoik it over a locked gate -the field's owner was not at home, sadly!

It's not mandatory to drink champagne after a flight, but then there are worse ways of celebrating

Email ThisBlogThis!Share to TwitterShare to FacebookShare to Pinterest
Labels: Balloon, ballooning, Bristol, Gone With The Wind