Trans Media Watch has been collecting examples of press intrusion and offensiveness, to present to the Leveson Inquiry. I contributed this piece from the Daily Mail, from December 2006.

As I said in the accompanying submission,

As requested: I declined the offer of a gagging order at my Employment Tribunal because I thought it was important to have the truth told.
Generally, reportage sensationalised the allegations made against me, and ignored or minimalised the actions perpetrated against me.
The Daily Mail phoned me, and asked me to reveal my former name. I told them that it was not relevant to the story, and that it was both wrong and bad practice to publish it. They found my former name somewhere, and again asked me to confirm it. I refused. They published it anyway.
There were other failings with the article, including an offensive headline.
I made a complaint to the PCC, on the grounds that I found the article biased, offensive and intrusive.
http://www.pcc.org.uk/news/index.html?article=NDQ4OQ%3D%3D
The PCC let the Mail off.
My abiding feeling about this episode is that the press involved in my story treated me as a figure of fun, presented for the titillation of their readers. I had spent two years pursuing a legal case, unaided, against a bullying company, and won; I felt that the press response, as exemplified by the Mail, was that that sort of thing didn’t (or shouldn’t) happen in their world, and that they resented what I had hoped would be seen as a victory for equality and fairness. I have learnt that the press are vile and not to be trusted. And that the PCC are worthless.

....the Daily Mail person also asked what title I used. "Ms", I replied. "The Daily Mail does not believe in using 'Ms'" he said. Hence the 'Miss', above. Go figure.

Here is the PCC's decision in my case.

Commission’s decision in the case of
Marland v Daily Mail

The Commission noted the complainant had raised three concerns: first, that the article suggested she had been subjected only to ‘taunts’; second, that the disclosure of her former name against her wishes intruded into her privacy; and third, that the headline ‘would you Adam and Steve it’ was discriminatory.

The Commission noted the complainant had raised concerns that the sub-headline suggested she had only suffered ‘taunts’ and misleadingly omitted to include the threats of violence and an assault to which she had been subjected. Taking into account that the fact she had suffered taunts was not in dispute, the Commisslon considered that — in the context of the article as a whole which made clear that the complainant had won her tribunal after suffering ‘verbal and physical harassment’ — it was not necessary for the newspaper to have included every detail of her ordeal. The selection of material for publication is a matter of editorial discretion, provided of course that the Code is not otherwise breached. In this instance, the Commission was satisfied that the omission of detailed information regarding the complainant’s treatment did not rendethe article misleading in breach of Clause 1 (Accuracy) of the Code.

The Commission then turned to the complainant’s concerns that the article had intruded into her privacy when it stated that it was ‘understood’ that her former name was XXXX, and that a person by that name shared her birthday and was listed as living in her flat until 2002. The Commission acknowledged that the complainant was unhappy with this disclosure, but emphasised that it could only come to a decision under the terms of Clause 3 (Privacy) of the Code. This clause makes clear that everyone is entitled to respect for his or her private life. The Commission indicated that it did not generally consider a name to be an intrinsically private detail. In this instance, the Commission was satisfied that speculating on the complainant’s former name using evidence available in the public domain did not intrude into her privacy in breach of Clause 3 (Privacy).

That said, given that the reference had upset the complainant, the Commission welcomed the newspaper’s offer to write to her privately to apologise.

...and here is the letter of apology from the Daily Mail. As you see, it does not apologise for the article, but expresses regret that I found the article 'distressing'. Which I hadn't. Annoying, yes. Species of dumbfuckery, certainly. But not distressing.....

THE DAILY MAlL
7 March 2007
Dear Drusilla
I write to apologize sincerely for any distress caused, which I assure you was in no way our intention, by our article and headline on Monday December 18, 2006.
The headline was not intended to be pejorative. The article is very positive to your case and fully reported the tribunal’s findings.
Nonetheless, it is most regrettable that you were distressed by the piece and I have brought your concerns to the attention of the members of staff involved who join me in saying we are sorry we added to your concerns at a very difficult time for you.
Yours sincerely
Robin Esser
Executive Managing Editor

Here, for a bit of light relief, is a bit of dumbfuckery from the Daily Sport. 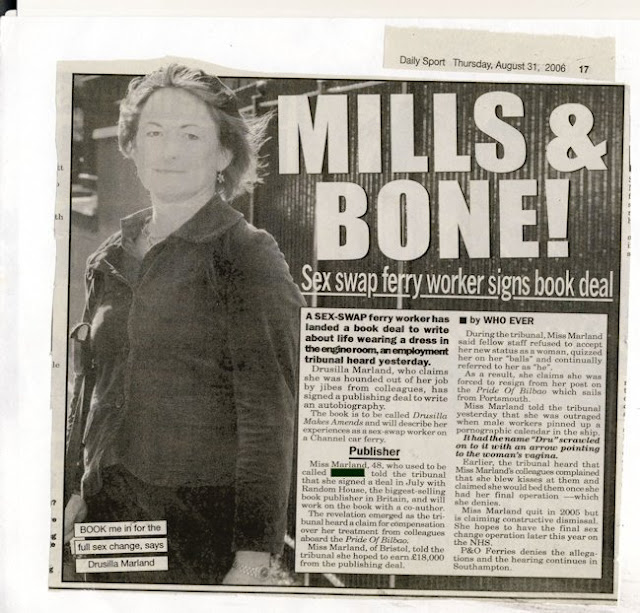 Written by Who Ever; presumably the person who wrote it was too ashamed to put their real name. In the Daily Sport's world, I apparently enjoyed 'life wearing a dress in the engine room'. Quite. It was a Vivienne Westwood one, with a useful tool pocket on the hem. The guys was sooo jealous!

...here is some of the earlier coverage of the case. This is where third party allegations, made by the perpetrators of the harrassment, were presented by P&O's HR people as 'evidence'. They were found to be without substance.

And here is a press statement of the case which I made at its conclusion. Compare and contrast!

A transsexual woman, formerly employed by P&O Ferries, has been awarded £64,862 compensation by a Southampton employment tribunal after it found that she had been constructively dismissed.
Drusilla Marland, 48, of Bristol, worked as a repairperson on the Pride of Bilbao from October 2002 until October 2004. During this time, she suffered verbal and physical harassment from the engine room crew.
The tribunal heard how remarks were made to her such as "We're all men here," "If he's got balls, he's a gentleman," and "When God made man it was Adam and Eve, not Adam and Steve." She was constantly addressed incorrectly, and referred to as "He, she, it, whatever."
When a pornographic calendar was introduced to the engine control room, she was subjected to offensive comparisons with the pictures. Chief engineer Steffan Robb commented, "It's a sort of training manual for you." When she requested that the calendar be removed, she was told not to make an issue of it. Finally, in August 2003, she found written on the calendar "Dru," with an arrow pointing to a model's vulva. When the engine room crew was assembled for tea break, she took the calendar down, said that she found it unacceptably offensive, and ripped it up. Among others who shouted at her, Gary Howard, the RMT union representative, said "You are going to get done…. not if, but when". Although the incident was witnessed by both ratings and officers no action was taken against Howard. The pornographic calendar was replaced with a similar one, and Marland was sent to Coventry by several crew members.
In June 2004 Marland asked Steffan Robb to implement guidelines for appropriate behaviour with transsexual colleagues, pointing out that similar guidelines had been implemented on a ship in Dover when an officer had transitioned. Robb commented "But they are an officer," and refused the request.
In September 2004, Marland was tripped up by Ged Pollard, a motorman with a history of hostility to her. She reported the incident to her superior officer, but he took no action. Finally, after making a written report, and ten days after the assault, she was seen by the senior chief engineer, Martin Sonnen. He told her that he wanted to drop the matter in case it became "messy", and accused her of "camping it up". Shortly after, she left the ship and collapsed with what her GP diagnosed as "work related stress".
An investigation subsequently undertaken by Sandra Ray, P&O HR officer, was judged by the Tribunal to be "flawed, perfunctory and superficial":
• She interviewed only those members of the crew implicated in the grievance, and none cited as witnesses
• Her finding that Marland's treatment "was not to the standard I would have expected" was deemed "so inadequate as to amount to an insult"
• She provided no explanation or grounds for her finding that the Chief Engineers and the Senior Chief Engineer were supportive of Marland. The tribunal judged that Robb's conduct in particular was "wholly reprehensible"
• Her claim that Marland's own behaviour was inappropriate was unsupported by any evidence
The Tribunal criticised P&O's senior management, particularly in the case of Peter Ambrose, P&O's HR Manager, for their failure to put in place adequate management instructions and guidelines with regard to employees undergoing gender reassignment. Ambrose's decision to allow the Captain and Chief Engineers to deal with matters, without their having received any instruction or guidance, was judged by the Tribunal to be a serious managerial misjudgement.

The result of the printing of unfounded allegations, for the propagation of which P&O were admittedly as much to blame as the newspapers in question, was that people who didn't know anything about either me or the true facts of the case, said vile things about me on the internet. Which is not nice. Is it? 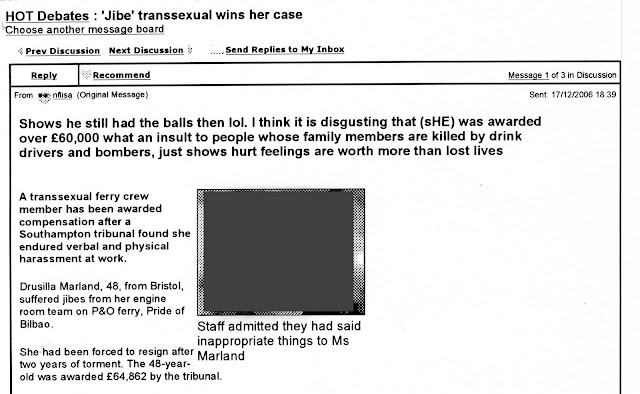