putting out the bunting 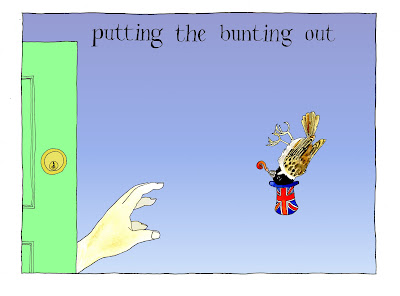 Last time there was a royal wedding, I was in hospital and unable to escape the hoo-ha. "Don't you want to come to the TV room?" a nurse would ask every now and then. I replied in the negative. Though I allowed myself a glass of celebratory sherry, when that came round. One is not a prig, you know.

Yesterday I saw that someone on Twitter was looking for an expert in flags. As she'd had no responses, I put my hand up, explaining that I am a former sailor and know a bit about flags.

Laura Carswell of the Bristol Evening Post explained that there had been reports of flags hung incorrectly all around Bristol, and asked what I thought of it, and what it all means, and how you can tell. So I wrote back

Flying a flag properly is like spelling. If you know how to do it, you can't help but feel a bit superior and relieved that it was someone else who goofed, when you see it done wrong, even though you know it shouldn't really matter.

The best reason not to fly the flag upside down is to avoid some know-it-all coming along and saying “You know that you’re flying that flag upside down, don’t you?” and then going on for the next ten hours about their time in the Army / the Empire / the Isle of Wight.

Hung upside down, it is supposed to be a distress signal. The trouble is, it would be really hard to tell from a distance. It’s easier with an ensign (the flag of the Royal or Merchant Navy, for instance, where the Union flag is in the upper left corner; if this flag were inverted, it would be quite easy to tell).

The correct way to fly a Union flag is with the broader white stripe uppermost in the ‘canton’, which is the upper quarter of the flag which is attached to the staff, pole or halyard. If the flag is hung on a wall, then the canton is always on the left as you look at it.

I do feel ambivalent about the Union flag. It seems to have been appropriated by thugs and right wing politicians. It’s nice to see British ensigns at the back of ships, though; but that happens a bit rarely these.

I don't think it struck a suitably patriotic tone; Laura was evidently too disappointed even to reply. I see that she has now canvassed the opinions of some proper experts, including a spokesperson from the Royal Marines Reserve, who said "The flag is a part of our national heritage. People should be aware of their heritage and should be taught so they know how to fly the flag the right way."

That's the right stuff... nothing like a bit of allonging and marshonging to lift the spirits, eh?