swimming towards the equinox 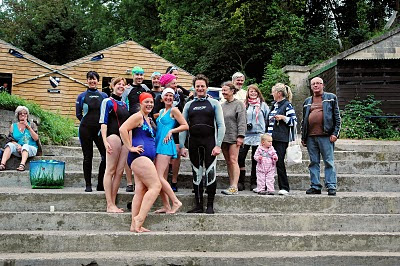 ready for the off, at the Dundas Aqueduct

It's been two months now since our first go at swimming along the Avon, when Mal ended up being the only swimmer. And it was getting to feel a bit late in the season. Still, you never know, do you? So I set up a Facebook group and sent out invites, and most people responded with regret that they couldn't make it, and expressing the opinion that we were brave.

It's always worrying when they say that sort of thing.

And Mal got on the grapevine too, and got some rather more enthusiastic responses.

-and suddenly it was Sunday morning, and I was looking out of the window at a grey and windy dawn and thinking how cold the water was going to be.

Still, you've just got to get on with it, haven't you?

I'd already collected the canoe from Long Ashton when Mal phoned.

"I've got a huge picnic," she said. "We've got absolutely everything. From vaseline to vodka."

"Good. I've picked up the canoe, and I'm heading down there now," I said.

The little lane down to the Claverton Pumping Station was parked up with hippy wagons from the canal boat people, and with the cars of visitors to the pumping station. Still, I managed to park next to the canal, and got the canoe ready. I think that the canoe is an essential part of the swim, to carry the swimmers' gear and to provide support in case something goes wrong. I hoped to get the chance to do at least some of the swim (it didn't turn out that way, but so it goes).

And then I had a coffee and spent a while shaking hazel nuts down from the trees along the lane. They were big and ripe and surprisingly uneaten by squirrels, and I wanted to make the most of them.


Then Mal and Adrian arrived, and then Barbara and Mike with their canoe. And then more and more people appeared, until there was quite a party on the towpath and cyclists had to ping their bells to get past. 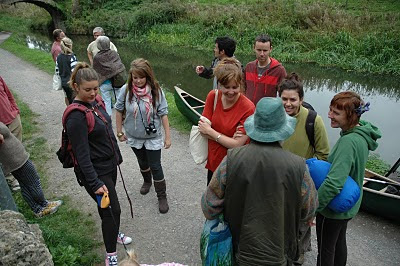 gathering by the K&A at Claverton

And the wind had dropped and the sun looked very much as though it was likely to come out too.

So off we went, along the canal towpath to the Dundas aqueduct. There is a useful flight of steps there, dropping down to the river bank, and a pontoon next to the Monkton Combe School boat house. 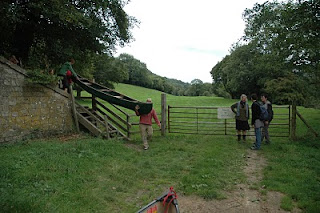 Barbara and Mike bring their canoe down the steps 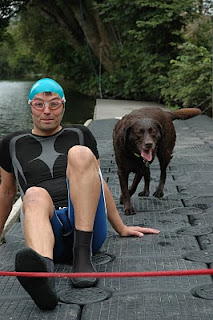 Paul prepares to dive in

And the people who were going to swim got changed, and Shanti and I got the canoe into the water. She had offered to help with the paddling. 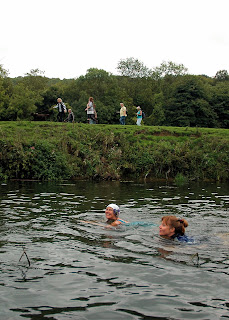 And away we went. A party set off along the river bank, where a footpath is indicated on the map. The footpath parts company with the river just before the weir at Warleigh, but we hoped to sort out that problem when we got there, maybe by ferrying them in the canoes. 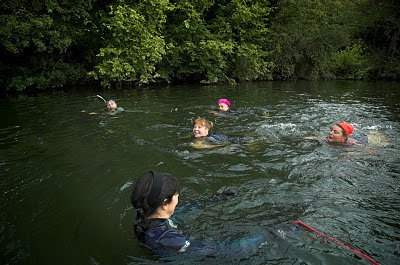 The water was indeed a bit cold. Or so I was assured by the swimmers. I was quite comfortable in the canoe. And it was a lovely afternoon. The surrounding woods were becoming deeply autumnal; conker trees drooped over the water laden with conkers; a kingfisher darted ahead of us; buzzards soared high above, and occasional mobs of rooks and jackdaws tumbled by.

The distance along the river is about a mile and a quarter. The current is barely noticeable, unless you are going against it in which case you realise that it is actually quite strong. The swim takes about an hour.

A little over half way there, Katie was getting too cold and tired to carry on swimming, so we helped her to a place where she could scramble up the river bank, and she got into some warm clothes and the Useful Blanket, and carried on along the bank, looking vaguely Middle Earth-ish. 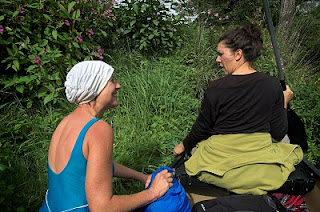 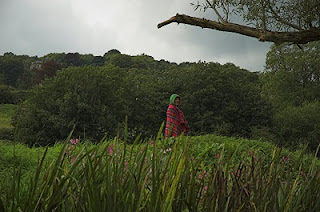 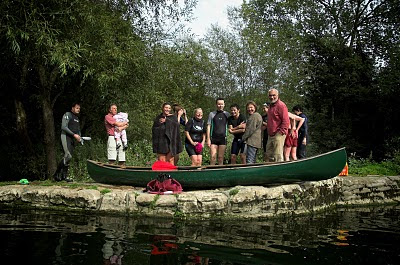 ...the walkers turned up a little while later; they'd ended up by the old ferry steps below the weir, but someone had kindly allowed them to go through their garden to get to it. They seemed a little wary about walking across it, not having seen it before. But Mary got the hang of it pretty quickly... 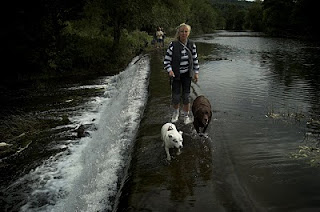 And it was time for that picnic. 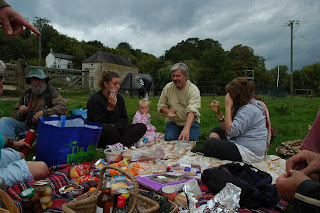 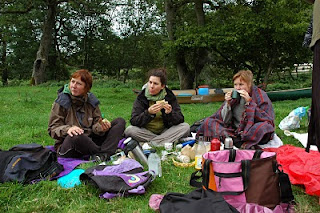 ...there are some more pictures here