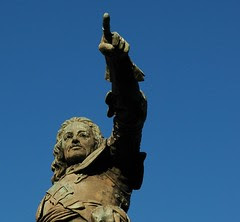 I used to know this artistic and creative bloke who once let it slip, when he was squiffy, that he was one of the ten best drivers in the country. I was seriously impressed by this, not least because I had actually been driven by him several times and had never guessed this. I guess it was his natural modesty. I used to wonder why he absent-mindedly and slowly pumped the accelerator as we bimbled along the motorway, so that I would find myself rocking gently forward and back as the car responded. Perhaps it was 'cadence'; he was a musician, after all. We used to refer to him as the Finest Swordsman In France, because it kind of fitted, and had he been a swordsman and in France, I'm sure that he'd have been the finest.

There are lots of arty and creative people in Bristol, and I have often been impressed by the way they apply that creativity to the art of driving and parking. Such people surely deserve a degree of latitude in their treatment of the city's roads; where they lead, we dull sublunary creatures can but dream of following. Here is a small selection of their comings and goings.

This chap has installed an 'en suite' in his Land Rover Discovery, and is able to complete his toilet while driving through the city centre, ensuring his completion of his journey in a minty fresh condition.

The owner of S100NDR is enabling a young girl to gain vital experience in negotiating the open road with her scooter. Pavements are not for scooters.

YY03VHK often parks here, just around the corner from the local primary school, so that cars have to slow right down to negotiate the corners. This is obviously a Good Thing.

WP07MVA has parked on the pavement so that it barely extends into the roadway beyond the the double yellow lines. This has allowed the Clifton Tractor to continue unimpeded on its school run. And we pedestrians managed to squeeze by in the bit of pavement left to us. This is a positive result.

CE54SXC has cleverly addressed the problem of reducing visibility at corners by acting as a separation zone, so that cyclists can easily pass on the inside.

The informally-accepted rule of the road in Bristol is that, if you park so far onto the pavement that the double yellow lines are clearly visible outboard of your car, then it doesn't count as an offence. So this chap who popped the wrong way down a one way street so that he could use the cashpoint machine sensibly used the pavement, to avoid giving a nasty surprise to traffic turning into the road in the officially-approved direction. This is on Lower Redland Road, just a few yards from the police station.

It was just opposite here, more recently (on Christmas Eve, in fact) that I watched a Range Rover mount the pavement so that the woman in the passenger seat could pop into the organic butcher's to collect her turkey. (This is a difficult time for the exemplary middle classes, who are 'time poor' at the best of times, and we must appreciate the difficulties they face in getting all the trappings of Christmas together at the last moment- it was hell at Waitrose, let me tell you....)

She hopped out of the car and saw me watching. She paused guiltily, then walked towards the butchers. I was pushing my bike along the pavement towards Whiteladies Road (it is, as I have said, a one way street), and there was only just enough room for her to pass, what with a Range Rover on the pavement and all. And as she went by she said, in self-righteous sort of way, "You shouldn't be on the pavement either, you know".

"I'm pushing it, you silly fool," I replied sharply.

And then felt bad about it because I should have handled the encounter more positively.